Hello everyone, I am Masakazu Okabe also known as the "Dribble Designer".

I have a theory about dribbling by which you can win with 99% probability in 1 on 1 situations.

The theory is called the "99% successful dribble" theory. With this theory, I have achieved not only a great number of winning matches, but also have had the opportunity to instruct a lot of football players who have played in the Japan national team as well as play with some of the the international stars of football.

I wrote the "99% successful dribble" theory Note in a way that anybody can put into practice. In other words, if you perfect what is taught in this theory, you can defeat any opponent 99% of the time.

"In order to master the theory, you need to improve not only your dribbling skills but should also have a willingness to take on a new challenge.

Having a strong mind to challenge is important for dribbling, no matter if you defeat your opponent or not. "

However, if you obtain the technical ability and mental confidence from this "99% successful dribble" theory, you will be able to dribble more aggressively and will be more likely to successfully dribble past your opponents.

More than anything, what I want to give you through this Note is a spirit of challenge by you using the "99% successful dribble" theory.

Having the spirit to challenge is very important, not just for dribbling or playing football in general, but also for studying, working and all manner of things that allow you to live an enriched life.

"I hope from the bottom of my heart that this theory will make all of you reading this be able to believe in yourself and do what you want with your courage." 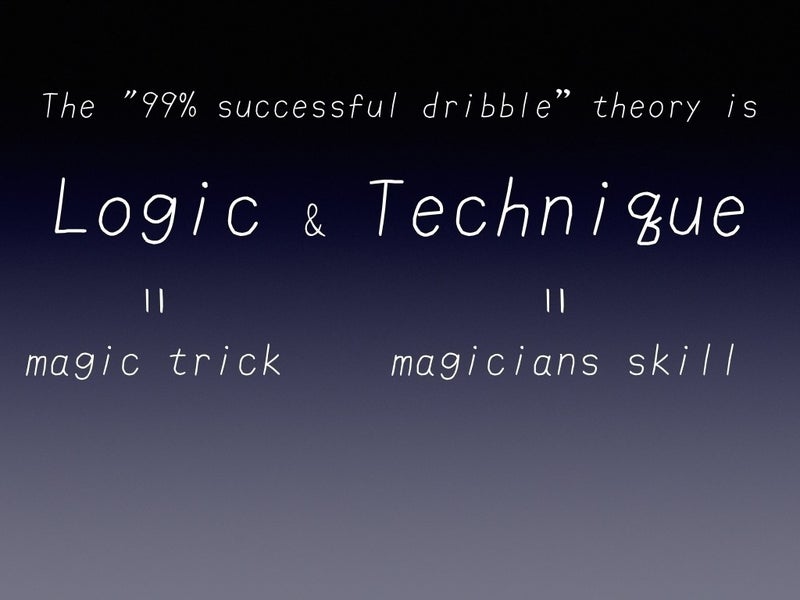 "For example, logic is like a magic trick and technique is the magicians skill of successfully performing the trick."

Likewise, when you understand the logic of dribbling (the principle for successful dribbling), you will be likely be able to perform basic dribbles. However, the possibility of having the ball taken from you by defenders will increase unless you have the right dribbling techniques and skills. Knowing only the logic won't help you very much.

"If you are an experienced football player and read the chapter regarding logic (the principle for successful dribbling),

it's likely that your dribbling with improve. But it may be hard to completely master the ""99% successful dribble"" by only understanding the logic. "

"In order for you to embody the ""99% successful dribble"" theory, I will explain the essential techniques of elaborate ball control, how to use your body and how to bring out the full potential of your physical ability in the technique edition of my Note.

I hope that you read both the Logic and Technique edition Notes and try to put the ""99% successful dribble"" into practice."

That being said, unless you first learn the "magicians's tricks" you can't start to master the "99% successful dribble". Read this logic edition to understand why the dribble is successful and perfect the image in your mind of what a successful dribble looks likes.

Logic is like a magic trick; a map to a successful dribble.

"As stated before, the application of both logic (the magician's trick) and technique ( magicians skill of successfully performing the trick) are what form the ""99% successful dribble""

What is important here, is to understand that logic is the key to dribbling.

As to why this is, if you blindly practice feints, ball handling and other techniques, but don't understand the logic of why you're doing them, it's difficult to use them and successfully dribble past any defender

As well as being the magic trick, logic is also a map; a way to a better dribble.

Trying to improve your technique without understanding the logic behind it is the same as walking blindly without a map for directions. No matter how hard you try, you'll never reach your destination = you won't master the 99% successful dribble.

To put it simply. No logic, no mastering the 99% successful dribble.

99% logic is made of two elements 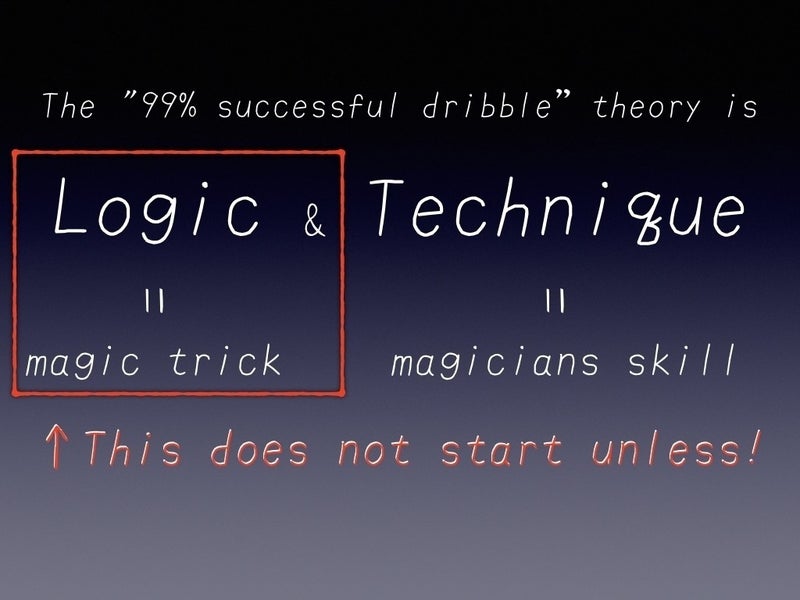 Technique is nothing but the tool to implement the logic.

It might be an extreme opinion, but as long as you 100% embody the logic, techniques like your ball touches or your minute body movements aren't that important (but please continue to read the technique section 😁).

The logic is really that important. It is the key to unlocking the "99% successful dribble"!

So, I hope I've got across the importance of the logic.

Now then, let's look at the logic in the '99% successful dribble' and find out all about what the "magician's trick" is on the next page.

Revealing the secret of the "99% successful dribble"

The logic of the "99% successful dribble"

So, how is it that I am so able to successfully dribble past any defender?

Many people may believe that maybe it's because I'm in some way physically superior etc. But this isn't the case!

When I'm asked how I can so successfully dribble, I only give them one answer.

If you watch my videos, you will see that this logic is the basis for all my plays.

That logic being that I create the conditions that will allow me to win.

In other words, as long as I don't make any misplays such as bad handling of the ball etc., I will almost always win (I have a 99% chance of successfully dribbling.)

You have to sneak into the space before the defender notices.

"""The space for assured victory"" = ""The space where the defender will definitely lose the play"".

If this space does exist, then it is unlikely that the defender is just going to let you cruise into there."

But, even though it may seem unlikely, if you watch my dribbling videos, you'll be able to see that often before the defender notices the ball has past them and they have lost the play, and also, that it possible to create this situation yourself!

The DF in this example is a professional player

This is the logic of my “99% successful dribble” theory.

So, I want to be able to say that now you know the core logic, you can go out there and perform the “99% successful dribble”. But...

・Where the "space for assured victory" is

・How you sneak into that space

Unless you know these two points, then you won't be able to perform the “99% successful dribble”.

In the next chapter. I will tell you where the "space for assured victory" is.